For the fifth consecutive year, banks and law enforcement agencies lead a campaign against “financial mules”

Law enforcement agencies and financial institutions from 31 countries have been working together for the fifth consecutive year to counter money laundering and “financial mule” schemes. The global campaign is organized by the European Cybercrime Center at Europol / EC3 – EUROPOL/ and the EU judicial coordination body Eurojust and with the partnership of the European Banking Federation of which the ABB is a member.

During this year’s campaign, 61 “financial mules” and 44 victims of those criminal activities were identified by Bulgarian law enforcement. In connection with the fight against financial crimes in our country, 39 illegal transactions with a total value of over EUR 1 million and over $ 300 thousand were identified during the current campaign.

A financial “mule” is a person who transfers illegally acquired funds between different bank accounts, often in different countries, and receives a commission for this activity. According to Europol statistics, in 95% of cases “financial mules” are used to obtain misappropriated financial resources acquired from previous cybercrime. Often the funds are intended to finance other criminal activities and money laundering.

Recruiters of money mules are coming up with ingenious ways to lure in their victims. This year, cases involving romance scams were reported on the rise, with criminals increasingly recruiting money mules on online dating sites, grooming their victims over time to convince them to open bank accounts under the guise of sending or receiving funds. Criminals are also more and more turning to social media to recruit new accomplices through get-rich-quick online advertisements, targeting students and young adults.

It is important to know that even if the persons used as “financial mules” are not aware that they are involved in illegal money laundering activities, they are committing a crime by transferring funds and this can have severe consequences for them.

The banking sector in Bulgaria supports the efforts of law enforcement authorities and actively cooperates with them in preventing and detecting financial crimes related to the laundering of funds obtained from illegal activity. Banks have strict rules and requirements to identify their customers, thanks to which they also benefit from high level of trust among consumers of financial services.

To raise awareness of this type of fraud, the money muling awareness campaign #DontbeaMule kicks off today across Europe. The awareness-raising materials on the ABB website inform the public about how these criminals operate, how the customers can protect themselves and what to do if they or their acquaintances become a victim of money laundering schemes.

If you think you might be used as a money mule, you should take action immediately before it is too late: do not transfer money and notify your bank and your national police immediately. 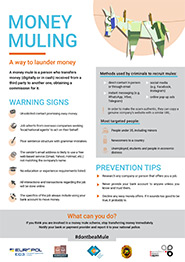 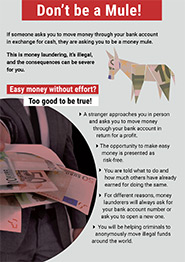 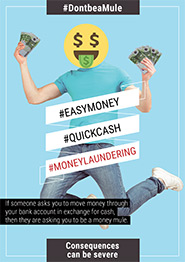 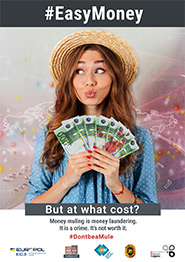 Tags:Pressrelease
0
ABB published information about the Bulgarian banking system in the third quarter of 2019