The banking system in Bulgaria in 2016 – facts and figures

In 2016 the banking system remained stable and recorded growth in the assets, deposits, capital and profit. The sector improved its financial, capital and liquidity indicators. That had a positive effect for the business and for the perspectives for economic growth.

The share of loans and advances decreased to 60,7% compared to 61,8% at the end of December 2015. The share of cash declined to 19,7% from 20,9% and the share of securities increased from 12,7% to 14,7%. The declining, even negative yields in the euro area, as a result of the ECB monetary policy, stimulated the Bulgarian banks to deposit significant amounts at the Bulgarian National Bank (BNB) in the form of excess reserves and to invest in government bonds. The credit activity has not been recovered yet and thus contributing to the high amount of cash in the banking system.

Deposits, accumulated by banks, continued to grow. As of the end of December 2016 they reached BGN 68,189 billion (EUR 34,865 billion) despite the historically low interest rate levels. This was an evidence for the confidence in the system which was due to the still high propensity to save by the households and the cautious investments by the non-financial corporations. Approximately two thirds of the deposits were held by the household sector (66,5%).

At the end of September 2016 the common equity tier 1 ratio (CET 1) and the total capital adequacy ratio for the whole banking system increased to 21% and 21,48%, respectively, from 19,98% and 20,46% at the end of December 2015. CET 1 and the total capital adequacy are considerably above the minimum regulatory requirements on a system level, and also above the average levels for the European banks, which were 13,7% and 17,91%, respectively. At the end of 2016 the liquid asset ratio, calculated in accordance with the BNB Ordinance № 11, increased to 38,24% from 36,71% as of 31st of December 2015. The indicator is substantially higher than the recommended 20% by the BNB.

The concentration in the sector remained very high. The top five banks falling in the so called first group of banks according to the classification of the Banking Supervisions Department hold 57,3% of the assets in the banking system – the share was kept as it was at the end of 2015. As of 31st of December 2016, the market share of the banks falling in the second group rose from 38,8% to 40,3%, as the share of the banks in the third group, including foreign branches, decreased from 3,9% to 2,4%.

In 2016 the credit risk continued to determine the trends in the balance sheets of the 27th credit institutions, operating on the market, as well as their behavior. Overall, the challenges, which the Bulgarian banks are facing, like their European and world competitors, are related to internal and external political uncertainty, volatility on the markets, decreasing interest margins and the need of constantly improving the efficiency in the banking sector, even through consolidation. Considering this, at the end of 2016 a deal between the Belgian KBC, sole shareholder in CIBANK, which is in the second group, and the National Bank of Greece for acquiring its Bulgarian subsidiary United Bulgarian Bank, which is in first group of banks, was announced. The sale of 100% of the capital of Commercial Bank Victoria, which is also in second group of banks, is expected in 2017.

In 2015, for the preparation for the Asset Quality Review (AQR) and Stress Tests, which were accomplished in August 2016, the banks made efforts to optimize their portfolios, mostly regarding the credit risk assessment. Banks used different instruments such as sale of loans and derecognition at the expense of their provisions. This reduced the overall credit portfolio and affected the amount of non-performing loans in the banking system, which kept the tendency for gradual decline. As of 31st of December 2016 the amount of non-performing loans (excluding Central Banks and credit institutions) decreased to BGN 6,99 billion (EUR 3,57 billion) as there were evidences for keeping the tendency.

Cost management and the change in price strategies allowed most banks to improve their profitability indicators. The net interest income rose by 1,2% year-on-year to BGN 2,81 billion (EUR 1,42 billion) from BGN 2,77 billion (EUR 1,43 billion) as of the end of December 2015. The net fee and commissions income grew by 3,5% to BGN 920,7 million (EUR 470,8 million). As a result at the end of December 2016 the net profit in the banking system was BGN 1,262 billion (EUR 789 million), which was 40,5% more than the profit, earned in 2015. Such increase is registered for third consequent year.

Overall, the banking sector was marked by the Asset Quality Review and Stress Test in 2016 and the results of it were published on August 13, 2016. The main conclusions are that the banks’ capital position is stable on systemic level and the sector can absorb potential shocks from adverse market conditions.

In November 2016 the BNB Governing Council defined as other systemically important institutions (O-SIIs) ten banks and, according to Ordinance №8 of the BNB for capital buffers of banks and guided by the European practice of using the overall scores according to the EBA Guidelines, set an applied level of the buffer for O-SIIs. The ten banks will apply the level of the buffer for O-SIIs effectively as of January 1st, 2018.

Consolidated data for the banking system in Bulgaria as of December 31st, 2016 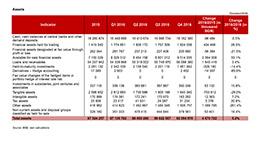 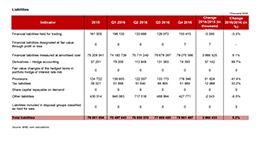 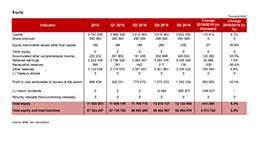